Hello everyone, I’m very new to Duplicacy, but loving it so far.

I’m looking for the most optimal way to backup data to both local and cloud (B2) daily.
Note that I’m backing up a bit more to local than I am to cloud as some of the data is just not critical to me.

This is my current schedule page.
Not sure if I could let local backups run one at a time or all at once, or have cloud ones run all at the same time? Really just not sure what’s going to give me the best speeds/performance here. 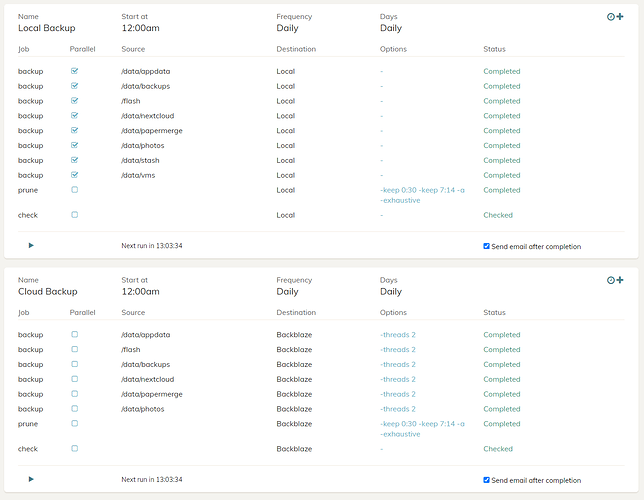 For critical directories, I would suggest backing them up to Local, then copying to Backblaze (instead of running another set of backups). This way, they will have the identical backups which makes the recovery much easier in case one storage has an issue. See this guide for more details: Back up to multiple storages

I guess that’s where things get a little wonky for me. Even something like my “nextcloud” data. I’m backing up all the trashed versions of files and file revision history locally, but not backing up any of that to the cloud because it saves a lot of space.

This is why I have two different backup sets for things right now because it makes it easier to exclude some things from the cloud backup vs the local backup. If my local storage had a problem I wouldn’t be too mad that I lost those file revisions and trashed files, cause I have bigger problems to worry about.

They’d be “nice to have” but not worth paying monthly to store them kind of thing, so this is why I end up running two different backup jobs for each one.

There’s also a lot of media files that I backup locally that I don’t want to pay for cloud storage for either.
Since there doesn’t seem to be a way (at least via Web GUI) that I can copy only certain backup jobs from one storage to the other, I have to keep two separate backups running?

I would run all backup jobs in sequential. A backup job can be disk IO intensive, even if there aren’t any new/modified files, during the file list phase.

Sounds good, thank you for the info. I’ll modify to un-tick parallel on all of them and maybe offset my cloud schedule by an hour or two then