Check and prune to continue on failure

Check and prune when encountering failure like this one:

There should be a way to have it continue for the purposes of identifying all bad snapshots in one go.

Actually, perhaps there’re is another issue lurking here — note how it is the same chunk?

It appears that the chunk was not found, was resurrected, and immediately not found again?

Google drive is eventually consistent — so when writing a file and immediately checking for it it may appear as if it is not there. Is that what happens here?

As duplicacy was running check there was another backup in progress from the same machine to the same account, and separate upload with google drive app to the same account so perhaps my google account was a bit busier than usual and perhaps was throttling api rate which perhaps made the issue worse. It was however pretty consistently repeatable.

Regardless, if duplicacy relies on uploaded files to be there immediately — it’s a bug that needs to be fixed, and it is not specific for google drive.

I guess this chunk is a metadata chunk and its content is needed by another revision. That is why Duplicacy attempted to download it after it had been resurrected.

Why was this chunk marked as fossil in the first place? Are you running prune with -exhaustive?

Why was this chunk marked as fossil in the first place? Are you running prune with -exhaustive?

I did run exhaustive very long ago (few months back) and after that the check has passed, so I don’t think it’s relevant. is it?

It is possible that a metadata chunk to be deleted is still needed by an ongoing backup that hasn’t posted the revision file. So this could happen even if you don’t use -exclusive.

If you run check or prune again does the error still happen?

The ultimate problem here is however that stale snapshots remain, because prune silently fails to delete snapshots. I’ve just ran it again: 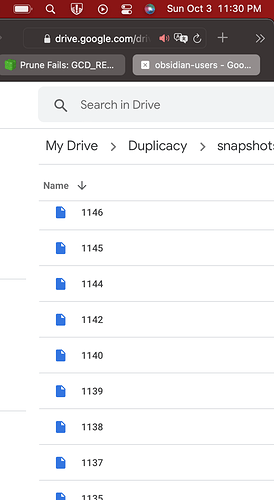 I guess this chunk is a metadata chunk and its content is needed by another revision. That is why Duplicacy attempted to download it after it had been resurrected.

Ultimately, the root cause for why did it get into bad state is this: Deleting snapshot from google drive fails snapshot files don’t get deleted, while their chunks are. Lets continue discussion of that issue there.

However my point was that duplicacy check should move on to the next revision and continue checking, not give up because it stumbled on bad revision.