I sent the email for them as a paid promotion.

There isn’t any opt-in/opt-out mechanism implemented for duplicacy.com but if you unsubscribe from that email you won’t receive any promotional email from us in the future.

I did not see that email because my mail service correctly identified it as spam and placed it to junk folder.

I fished it out, and it is indeed very troubling:

that redirects to https://www.idrive.com/e2/support, further reinforcing that the email is from iDrive.

And then in the footer there is this:

Maybe the “Why did I get this” will provide clarification? This link goes here: 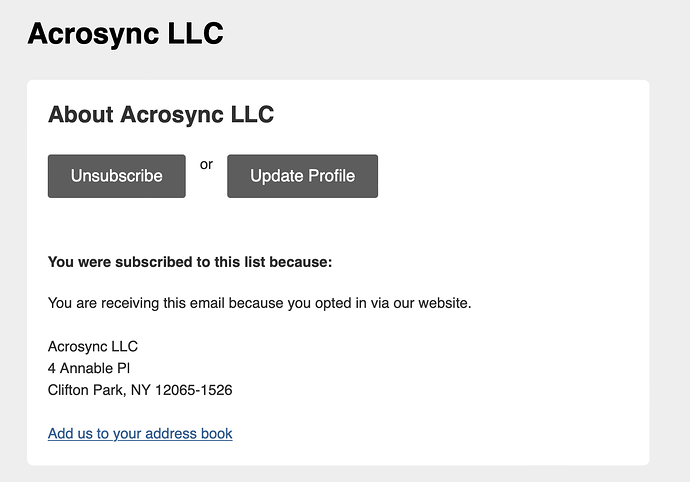 So I went to duplicacy.com, logged in to my account, and I don’t see anything indicating consent to receive commercial emails. I don’t remember subscribing, or opting in either.

I don’t like this whole ordeal one bit. I understand that sending from duplicacy is to avoid sharing customer list with idrive, and it’s the right thing to do, but this should have been explicitly visibly marked as sponsored content, authorized by but not endorsed by duplicacy. Because receiving spam from one company routed via another company is obnoxious to say the least.

I also got this email. I would have less of a problem it it would have been sent from Duplicacy owner, but impersonating someone else and hiding original sender is troubling.
I reported this email as spam.

I used MailChimp to send the email, and picked idrive@duplicacy.com as the From address after discussion with IDrive people. There was no intention to impersonate anyone or hide anything. No user info was shared with IDrive.

This is completely my fault. I apologize for my poor judgement. I promise there won’t be any promotional email ever again.

This is completely my fault. I apologize for my poor judgement. I promise there won’t be any promotional email ever again.

Thank you. This closes the issue for me. As noted by others here and elsewhere, promoting a product that is proven to work well with or enhances the value of Duplicacy in a blog or forum post is okay by me. Sending me promotional emails like this one is not.

I received it, but i assumed it was from you.

Promotional material is fine, but it should be done carefully. I suggest that you have an opt-in/out when joining the forums or purchase a license or whatever and perhaps next time treat it more like those YouTube ads where it’s clear it’s a paid promotion.

Thanks for the clarification. Just like others in this thread, I am fine with promotional/commercial emails per se (if relevant and, preferably, on an opt-in basis), yet this particular mailing was executed not the best way. However, I’ve decided to keep myself subscribed and see if I get a better-tailored promo message next time:)

As others have said - promotional emails are ok if done right.
I actually use iDrive with Duplicacy for awhile and it works fine moving local bacup copy to the cloud…

When I received the email, I wondered how iDrive knows that I use duplicacy and my first thought was that they hacked the forum and harvested the emails but since I know that the discourse developers are very good, I considered that unlikely. Then I remembered that @gchen keeps a separate customer database, so I figured it would be that database that was compromised. But before I contacted @gchen I wanted to check who iDrive is and when I saw this

I concluded that he (Acrosync) started a hosting business called iDrive. I thought it strange that he would use such an expensive (I assume) domain for that, but didn’t care to investigate further.

So thanks for clarifying this. I agrre that sending promotional emails without consent is not okay and the fact that it was unclear that this was a paid promotion from a third party doesn’t make things better.

For the future, I suggest we create a category for promotions which people can watch if they don’t want to miss anything. What I like about that is also that it allows users to reply to promotions and jointly evaluate the value of the offer.

I don’t know if you have seen this topic

, but I think it will help you understand

We launched IDrive e2 on April 13, 2022 offering no ingress or egress charges, storage starting at $0.004/GB/month and a fast network of 8 edge locations in the US and recently added location in Ireland. Duplicacy users! IDrive e2 is now available as a repository for your Duplicacy backups! As a special, IDrive is offering 90% off plans for the first year, along with a 1TB 30 day trial for Duplicacy users! Please signup here: https://app.idrivee2.com/signup-duplicacy We are also faster than AW…

I have seen it, but to me it raises more questions than it answers, but I’m not going to fuss about them now.

If Acrosync wanted to endorse and recommend a service that works great with the product it sells – nothing wrong with that. That’s what blogposts are for. But when it demonstrably does not work with duplicacy what shall we assume about the motives of this stunt?

As I promised I will never do this kind of promotion again. This is a lesson learned for me.

For those of you who tried IDrive e2 and gave up because of some upload errors, you may want to give it another try. As far as I know they have fixed all errors reported in the other thread. As of now, all my tests have been successful.

This topic was automatically closed 10 days after the last reply. New replies are no longer allowed.