I am using Duplicacy Web to backup to google drive (My Drive). Having done this, I have noticed google backup and sync now takes a long time to start up, processing 100,000s of files, even though the backup folder is excluded from files to be synced.

Is there a way to use google drive outside of the standard (my drive) something like Computers, where backup and sync backs up to? To illustrate: 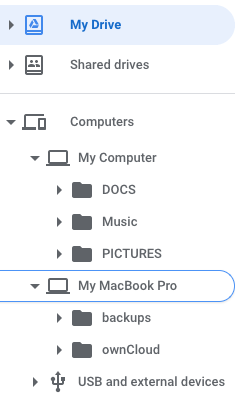 I would like Duplicacy if possible to backup to Computers->My Computer->STORAGE if that is possible.

So you want to back up to a local directory that is not synced with google drive?

When selecting a local directory as the storage you can select any directory on this page: 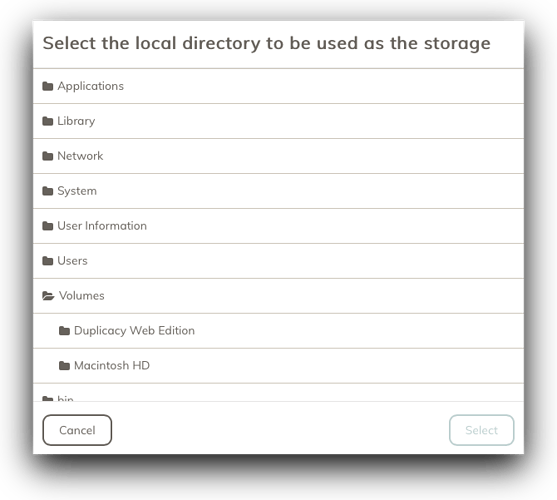 The directories you want is probably under /Users/username/.

i.e.
NOT My Drive\STORAGE (which is where I am currently backing up to)
BUT Computers -> My Computer -> STORAGE

STORAGE being a folder created in google drive under Computers -> My Computer.

So for instance, in Google Backup and Sync if I add somefolder to the following list 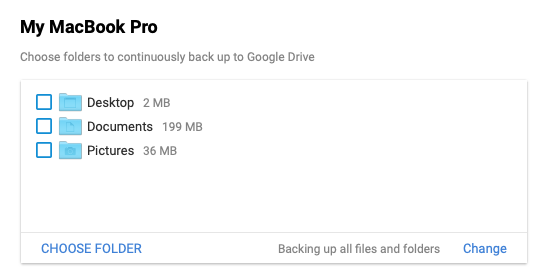 I would like to be able to configure duplicacy web to backup to Computers -> My MacBook -> STORAGE rather than My Drive -> STORAGE.

No thoughts on this?

Backing up to normal google drive seems problematic for Google Backup and Sync as it takes an age to start up as it (stupidly) scans the millions of files in the duplicacy backup even though that folder is excluded from sync. At least that what it seems to be doing in my case.

Google Backup and Sync uses separate space (I don’t know a technical name for it) to do backups to, so if I backup my DOCS folder, this appears in google drives web interfaces under Computers -> Computer Name -> DOCS

It would be nice to be able get duplicacy web edition to backup to there instead, so Computers -> Computer Name -> DUPLICACY_WEB

This seems to be possible to achieve with the Google API, according to the Rclone docs:

Hi, Similar to https://forum.rclone.org/t/rclone-how-to-access-google-drive-file-from-google-backup-and-sync-computer-folder/4000 The new official Google "Backup and Sync" client adds new folders to Google Drive under "Computers" in the web...

However, the experience is less than perfect - “There doesn’t appear to be an API to discover the folder IDs of the “Computers” tab”, they say. You have to dig it out of the URL when browsing Google Drive.

My guess is that Duplicacy would have to be modified to support an alternative root folder ID. (Or maybe not; if the URL can simply be pre-pended with / to the path? Unfortunately, I don’t use Backup & Sync in order to test.)

Edit: alternatively, there also seems to be a way to limit the scope to Application Data.

In the end, I gave up with google drive, deleted all the backup data, and started a fresh with a backup to a locally attached USB disk. The performance hit on google drive (Backup and Sync client) when there is a large duplicacy backup storage on the drive (excluded from sync) was just too great to stomach. The fault lies I think with google drive or their sync client, I don’t understand why it (seems to) enumerates the duplicacy folder when it isn’t selected for syncing. Shame as I have 2TB storage. I will have to look for alternate cost effective cloud backup storage solution to use for duplicacy.

I will have to look for alternate cost effective cloud backup storage solution to use for duplicacy.

I’m a happy Backblaze B2 user. Wasabi is an alternative too.