Duplicacy reading entire HD when starting a job and more

I’v noticed that Duplicacy is reading my entire HD when starting a job for B2. It’s over 4TB of data for one Volume so It takes a while. It isn’t supposed to be like that, right?

My current setup is this:

The other thing I’v noticed is that the revision ID “7” when trying to restore only shows one Volume, and the next “rev 8” shows the other… they should show both volumes in the same ID? 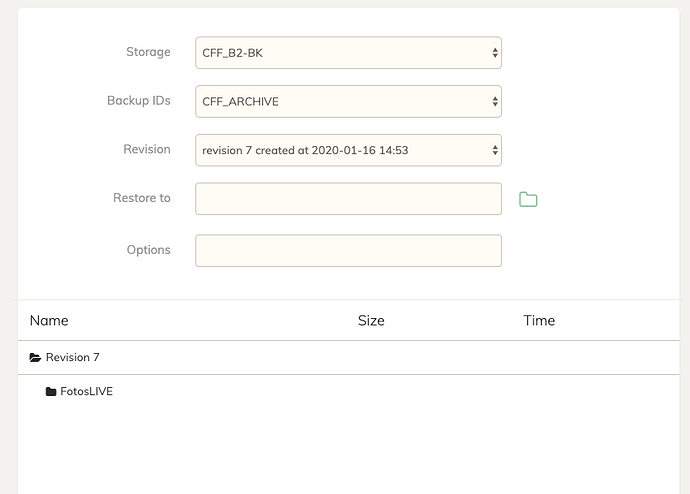 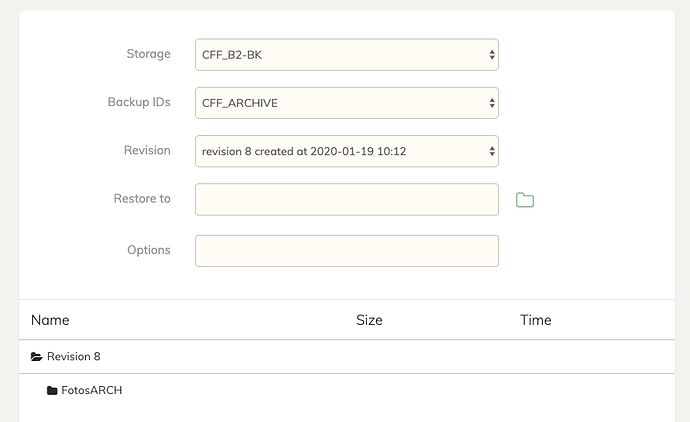 You have 2 backup jobs - backing up 2 different repositories - using the same ID. This is a bad idea, particularly because each new backup thinks it’s encountering new data - i.e. because the last backup was of an entirely different location.

You need to use unique IDs. Chunk de-duplication will still work, but you need to use different IDs so the incremental backups can properly track the changes. Fix that and it won’t scan the HDD so much.

Hmm ok. I see that I’v selected the same ID instead of creating a new one.
In fact I created another post last week about it. I have set different filters for each job, so they don’t encounter new data, but still scans everything from each HD.

In this case, when I create the new ID in the same repository, I will move the files (in about 6 months) from ID 2 (Live files) to ID (1) Archive. Will de-duplication work and not upload everything again?

And now that I’v already uploaded my “Live files” (around 800gb) to B2, is there a way to delete them from there? So I won’t be paying for that data that will never be used again in this specific ID.

Yep, most chunks will be de-duplicated regardless of what ID they’re in…

Notice however, when you’re uploading a new repository for the first time (or the file history of a particular repository ID is being nuked by another location’s file metadata for the same ID - as you’ve just experienced), it’ll take longer to finish the job because it’s re-hashing file contents locally. It’ll skip the majority of chunks and even appear as though it’s still uploading. Those numbers aren’t upload speeds, but throughput of how much data is being processed.

As for deleting your ‘Live’ files, there probably isn’t much point as most of the chunks will be referenced by the Archive, but I’d set a normal retention period for your prune operation on that repo and those old snapshots will disappear eventually. Or, you can always prune individual revisions to speed that process up, and in case you want to tidy up the moments when it was interleaving between the two repositories with the same ID.

You really don’t need to do anything special with the backup jobs when moving stuff from Live to Archive - just move your files between your repositories and Duplicacy will take care of the de-duplication for you.

Edit: Oh, and as @leerspace mentioned, it’s a good idea to test with -dry-run.

Let me ask you something about ID’s.

It need to be an Unique ID every time or only If I’m backing up to the same location?
For ex, this is my current setup, sometimes when backing up, duplicacy is reading it all over again, but not always. Is it still wrong? 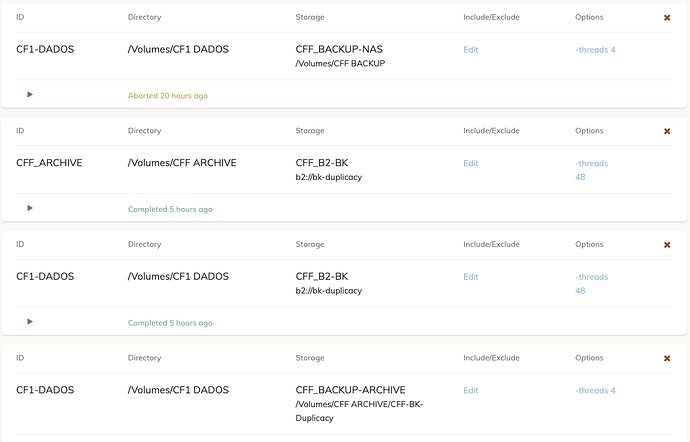 Edit: I misread and thought CFF_B2-BK is the id.

I notice that your fourth backup is backing up to a storage in /Volumes/CFF ARCHIVE which, in turn, is also being backed up. Have you excluded this directory or are you in fact backing up a Duplicacy storage?

Otherwise, your IDs seem OK. You have three backups with the ID CF1-DADOS, but since they point to the same repository and each go to a different storage, that should be fine.

The fourth backup is a Lacie 2Big in RAID 12TB. I have my Archive there, and an extra destination to my Live Photos (in this case backed up by duplicacy). When uploading the archive to the B2, I’m excluding the duplicacy folder.

I must be doing something wrong. It is still scanning my entire HD, but I can’t find a pattern on why. Sometimes it does, sometimes not…
How could I find this issue? 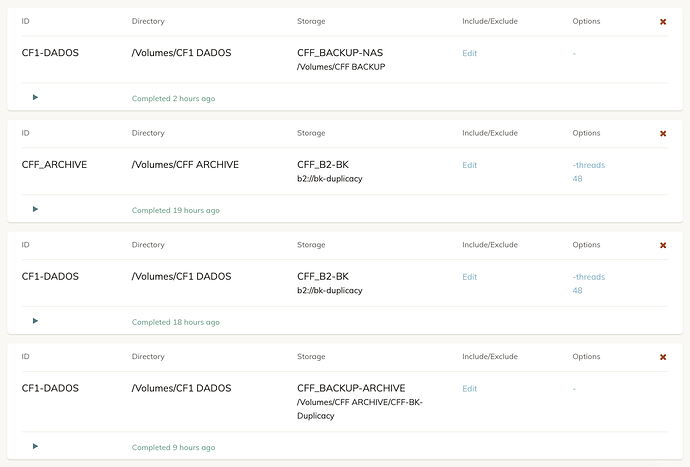 Can only make a couple of suggestions here…

My main HD with my live files is an external, I use it at home and then take back to office next morning, but the backup schedule is running every 6 hours…

Is there a way to solve this? I mean, Duplicacy should be smarter about it. Only start a revision if the storage is connected?
It will be a pain for me running it manually, and I might forget one day and lose things.

Is there a way to solve this?

Maybe by using a pre-backup script that does something like this:

You can instruct Duplicacy to run a script before or after executing a command. For example, if you create a bash script with the name pre-prune under the .duplicacy/scripts directory, this bash script will be run before the prune command starts. A script named post-prune will be run after the prune command finishes. This rule applies to all commands except init. On Windows these scripts should have the .bat extension in their names, while on linux they should have no extension. Beware, wit…