Duplicacy offers two different methods for providing include/exclude filters, wildcard matching and regular expression matching. You may use one method exclusively or you may combine them as you deem necessary.

All paths are relative to the repository (the folder you execute duplicacy from), without a leading “/”. As the upmost folder on Windows is a drive, this means drive letters are not part of the path of a pattern. The path separator is always a “/”, even on Windows. Paths are case sensitive.

Patterns ending with “*” and “?”, however, apply to both directories and files. When a directory is excluded, all files and subdirectories under it will also be excluded. Therefore, to include a subdirectory, all parent directories must be explicitly included.

This is because duplicacy considers all matches and exclusions at each level in the file tree before descending into the next level (a “breadth first” search for matches). This makes the search much more efficient, but can produce confusion about the order an interpretation of filter rules.

For instance, the following pattern list doesn’t do what is intended, since the foo directory will be excluded so the foo/bar will never be visited:

This does not work because
-*
implies
-foo/

So when duplicacy examines the first level of the file tree for matches and exclusions, it excludes foo/ and everything underneath. That means that it never goes to the second level into foo/, and therefore never sees a match for foo/bar/. It also excludes all other top-level directories, producing an empty backup.

So, we have to make sure foo/ is included first, before the wildcard excludes it. Here is the correct way to include foo as well:

To include a directory while excluding all files under that directory, use these patterns:

To include files in a directory and exclude its subdirectories:

Some examples of regular expression filters are shown below:

Explanation of the regex above:

As seen in the examples above, you may add comments to your filters file by starting the line with a “#” as the first character of the line.
The entire comment line will be ignored and can be used to document the meaning of your include/exclude wildcard and regular expression filters. Completely blank lines are
also ignored and may be used to make your filters list more readable. Note that if you add # anywhere else but at the beginning of a line, it will be interpreted as part of the pattern, not as a comment.

Importing patterns from other files

See the details in Filters just got a big upgrade: @import files.

Start with version 2.3.0, you can now specify the location of the filters file rather that the default one at .duplicacy/filters. To do this, run the set command as:

The path can be an absolute path, or relative to the repository path.

You can also edit the .duplicacy/preferences file directly to add the filters key.

This option means that you can now use a different filters file for each storage.

Do I understand correctly that with Wildcard Matching, the entire path must be specified? For example:

But in Regular Expression Matching, the expression only needs to match part of the path? For example:

(also, is /$ at the end the regular expression the correct way to exclude a directory?)

A post was split to a new topic: Patterns for exclusion are confusing

This is correct, and mostly because the only regex matching function in Go, regexp.Match, behaves more like Search in other languages (I had been confused by this for a while). So if you need to match the entire path then the anchors ^ and $ are required.

And yes, /$ at the end matches directories only.

4 posts were split to a new topic: How to restore files after a certain date

2 posts were merged into an existing topic: How to restore files after a certain date

I like to back up my entire Linux root volume, in the hopes I can later (a) restore it fully and (b) see changes to any areas by diffing backups. This should work, right?

Has anyone made a filter file for this purpose, excluding those folders that don’t need backup up, such as /dev, /proc and log dirs?

I also tried it through the GUI but upon saving, it says

Failed to write the pattern file: open /Users/matt/.duplicacy-web/filters/localhost/0: not a directory

Thanks for your help.

I suggest the addition of the Thunderbird file global-messages-db.sqlite in the exclude list.

Duplicacy usually throws an error on it because it was partially blocked by another process and this makes the entire backup fail. For example:

We don’t really need to backup this file anyway, since it is only an index that is recreated if not found.

Welcome do the forum, @fbreve!

I suggest the addition of the Thunderbird file global-messages-db.sqlite in the exclude list.

Yes, it is not necessary. And I also exclude all the msf files and caches.

I have no issue backing up my Thunderbird profile while in use, when using the -vss option flag.

I’m having the same problem. The documentation is sorely missing

I’m not a paid user so I have only backed up from the command line, but in case it helps I have successfully used a filters file in Windows in that situation.

I notice that the web ui does in fact generate a .duplicacy folder for each repository. They’re in .duplicacy-web\repositories\localhost\all. I speculate that a filters file there might work, but it would cost me money to find out for sure.

Use the Web GUI to create the filters file for each backup job in the first place. It’s under the Backup tab, click the Edit link under Include/Exclude column for a backup.

You can exclusively use the GUI to add, delete and rearrange lines, so you technically don’t need a text editor, although you can edit the file after it’s been created, and it’ll be in the numbered repository directory - i.e. .duplicacy-web\repositories\localhost\0\.duplicacy\filters (where 0 is the order in which backup tasks were created).

To add to this, you can use duplicacy’s GUI editor (that is really awkward to use in the first place, compared to a plain old text editor) to create a filter file that contains just a single line: import contents of another file. And that other file can be elsewhere. I like to store mine in the Documents folder, that gets replicated everywhere, can be edited from anywhere, and is available to all duplicacy installs. 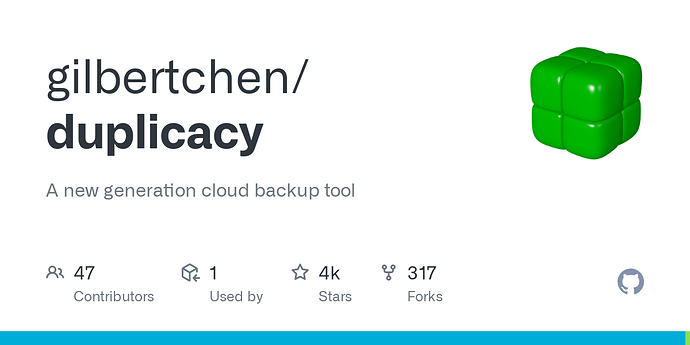 A new generation cloud backup tool . Contribute to gilbertchen/duplicacy development by creating an account on GitHub.